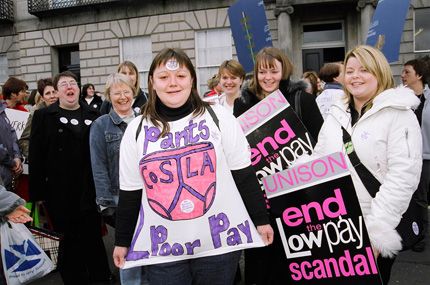 A bit of working class history is being made in Scotland on Wednesday 20th August. For the first time ever, all three trade unions in all 32 Scottish local authorities are taking united strike action. The cause is a derisory pay offer from COSLA, the coalition of Labour, SNP and Lib Dem councils; an offer that falls far short of inflation and that would imprison up to 200,000 workers in pay cuts for the next three years.

This one-day strike is a magnificent display of workers’ unity in action. As well as every council office, council depot and council service being shut down for the day, it is likely that at least big sections of PCS members, workers in the civil service, will join the strike in parallel action against their own government-dictated 3-year pay cuts.

City rallies will give workers and the wider public a taste of the potential power working people have.

The shut-down will act as a reminder of how reliant we are on these public sector workers for the provision of the whole range of public services that go towards something approaching a civilised society.

The 20th August strike will rattle the council leaders to their foundations, and will reverberate round Westminster and Holyrood, where the cost-cutting, pay-cutting budgets and pay ceilings emanate from.

And this one-day strike is just the opening shot in a war against attempts by local, Scottish and UK governments to make public sector workers pay for a crisis not of their making – by the imposition of pay cuts whilst prices and profits let rip, to the benefit of the millionaire minority and the detriment of the millions who work for a living.

The three unions have agreed to follow up this mighty show of strength with selective action across every council, involving key groups of workers for 3 days at a time, and further united one-day strikes if the employers don’t cave in to the power of the initial action.

This represents the biggest industrial action in Scotland for years, surpassing the strikes in defence of public sector pensions, uniting workers of all unions, all grades and occupations in all 32 councils.

He told the Voice about the background to workers voting overwhelmingly to strike.

"The unions’ claim was lodged before Christmas (the settlement date is 1st April 2008) for 5% or £1,000 (whichever was the greatest), additional annual leave of 3 days and an extra public holiday.

"The employers’ (CoSLA) initial offers were rejected and a final offer was made of 2.5% each year for 3 years. This was rejected by the 3 unions and this was confirmed in a joint consultation with members. In brief it was rejected because it was over 3 years, 2.5% was too low and the unions wish to see a weighting towards the lowest paid.

"Members in each union were then balloted separately but on the same timescale over July and asked to agree to take strike action in pursuit of the claim. The response has been overwhelmingly in favour of standing up for the claim by taking strike action."

In fact UNISON members voted by a 70 per cent majority, GMB members by 74 per cent and UNITE(TGWU) by 68 per cent for the plan of action jointly advocated by the joint trade unions.

The anger underlying this mandate for action is widespread and gathering pace with every daily announcement of price hikes for fuel, food and household utility bills.

Pay deals for years in local government have failed to keep up with inflation. As Barbara Scott, UNISON steward in City of Edinburgh Health and Social Care puts it,

"I’m striking because council workers delivering essential services have endured pay cuts for years. The people caring for the most vulnerable groups in society ought to be valued by the employers rather than treated with contempt."

"The 2.5 per cent pay offer is a pay cut with fuel and housing costs spiralling. The offer is insulting. I came to work in public services to deliver a first class service. I don’t deserve to get second class pay. We are expected to take pay cuts while bosses in the boardrooms show none of the same restraint."

The growing chasm between pay and prices, wages and profits, the incomes of ordinary workers and those of the fat-cats, has fuelled the rage of council workers who are ‘downing tools’ on 20 August.

One of them, Alison Kelly, is a Care Worker in Glasgow. She told the Voice,

"Without a decent pay rise I will be sick with worry at the mounting bills for food, gas, electricity, and a roof over my head. Council chiefs with their salary rocketing to £150,000 won’t be worrying about how to pay the rising energy bills. To offer us 2.5per cent is an insult and we must all stand together and proud."

A recent example of insensitive arrogance from council chiefs was displayed in SNP-led Renfrewshire. They awarded the top 26 directors and heads of service pay rises of 17 per cent over two years – the same week workers started balloting to strike against 2.5 per cent over 3 years! Their explanation?

‘It has become increasingly difficult to attract the highest calibre candidates for senior management posts, while retention of skilled senior staff is now also an issue.’

The same council announced education cuts that will slash 50-100 teachers’ jobs, as well as part-time teachers suffering cuts to their hours, loss of sick pay rights, with job prospects taken away. So apparently it’s only the fat cats who need to be bribed to attract and retain ‘the highest calibre candidates’; no such approach to the badly-needed, skilled staff, who are to be bludgeoned with pay cuts.

"Some of our low paid members on £6.50 an hour, who have to run a car to get to work, calculated that with COSLA’s 3-year offer they would use up about a third of their weekly income just to fill the tank.

"COSLA have accepted Brown and Darling’s pay restraint without question. And thanks to their deal with the SNP government over council finance, it means low pay as well as cuts in services. It’s time to challenge the logic of all this."

COSLA chiefs bemoan the underfunding from the Scottish government, who in turn blame Westminster for inadequate block grants. But neither the council leaderships nor the new SNP government have so far taken the obvious, courageous step of uniting with the unions, demanding the additional funding from Holyrood and Westminster.

That is what a Scottish Socialist Party-led council would do, and it’s what our councillor in West Dunbarton, Jim Bollan, has consistently fought for alongside council trade unions in his area.

United industrial action is the chief weapon of struggle for decent pay, but it also needs to be sharpened by an awareness of the political solutions to this underfunding.

New Labour is now widely recognised to be the party of the rich, who preside over pay cuts for workers but average pay rises of 37 per cent for the top company bosses last year. They are the party trying to imprison workers in 3-year deals that fall short of even half the level of inflation.

The SNP appear more radical than Labour; it would be hard not to! But they too put the interests of big business before those of workers, with their own Scottish Public Sector Pay Policy demanding a ceiling of 2 per cent on public sector workers’ wages. John Swinney, SNP Finance Minister, last year described the public sector as ‘bloated’, and his government has demanded ‘efficiencies’ of £1.6billion over 3 years, which is a recipe for a cull of jobs and service.

Civil servants directly employed by the Scottish government have just taken strike action against the same 2 per cent pay offer over 3 years from the SNP government as others suffer from Westminster’s Labour administration.

A pay cut is a pay cut, whether imposed by COSLA, Holyrood or Westminster, whether by New Labour, the SNP or Lib Dems.

And it boils down to a question of government priorities. As Willie Campbell, UNISON steward in Glasgow Social Work told me,

"The bankers have been bailed out with £billions of public money. There’s a blank cheque for war and Trident. But workers’ families are expected to take pay cuts for 3 years. It’s not on."

The Scottish Socialist Party – both within and outwith the ranks of council workers and civil service staff – never hesitates to side with workers against their employers, with strikers against councils and government.

We will do whatever is feasible to build the widest public support for the strikers, demanding funding for the pay deals from Holyrood and Westminster, raising the demand for taxation of the rich to help fund decent pay and 21st century public services. We have clear priorities: people not profit.