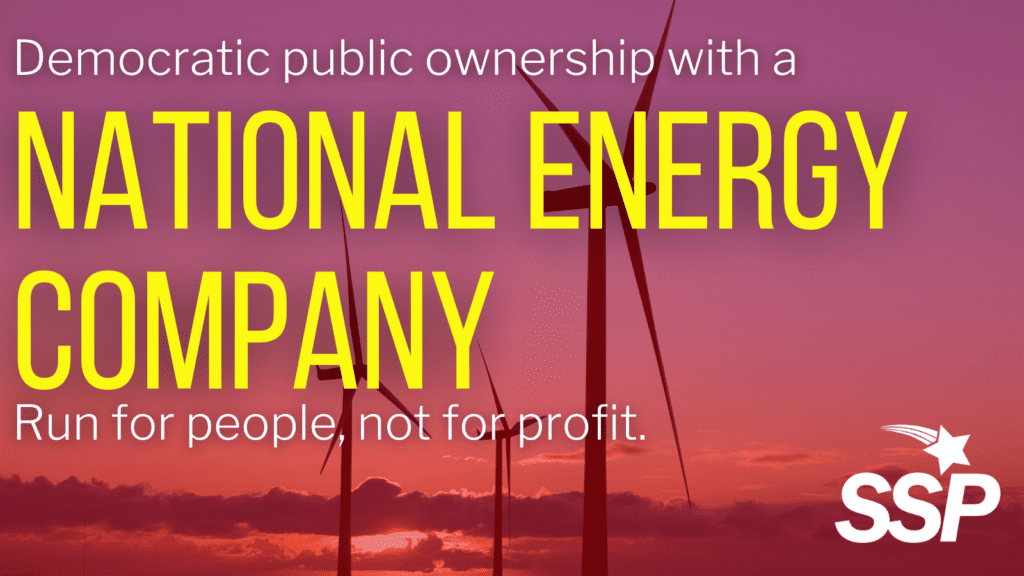 Energy is a human necessity, and no society can thrive without it. But private energy tycoons currently control where our energy comes from and how much it costs us. While private energy profits, working-class people have gotten poorer, and our planet has gotten warmer.

Scotland’s energy must be used for the collective good, not for private profit.

ScotWind: a Bad Deal for Scotland

Over 7,000 square kilometres of Scotland’s seabed have been auctioned off for the construction of the biggest offshore windfarm project in Scottish history – sold for just £700 million. That’s just one-third of the original estimated value set by Crown Estates Scotland.

None of the winning bidders are based in Scotland. Over 20% of the total has been grabbed at fire-sale prices by two of the globe’s biggest polluters, BP and Shell.

There are no guarantees that ScotWind investments will deliver substantial new jobs in Scotland.

Economists have calculated that a National Energy Company could have seen an annual income to the Scottish government of at least £5.5 billion – far more than the £50-90 million that will be received every year.

Private energy companies will make pure profit on ScotWind after the first year. They could recover the cost of their initial fees for the seabed licences in just two days. Experience makes it clear that none of this profit will “trickle down” to working-class people in Scotland; Shell and BP receive more in public subsidies than they pay in tax.

Their profiteering is wealth lost to Scotland. We need a National Energy Company, and democratic public ownership of the production and distribution of energy.

From 1 April 2022, our energy bills are rising by an average of £700 – a price hike that working-class people just can’t afford. As many as one in three households in Scotland already experience fuel poverty.

At the same time, private energy companies made £750 in profit every second in 2021.

Private energy barons hold a monopoly on the supply of energy in Scotland, including renewables. Big polluters like Shell and BP receive more in subsidies than they pay in taxes, despite soaring profits. While millions face runaway energy bills, the CEO of BP – which takes in £900 per second in profit – likened his company to “a cash machine”.

Scotland is an energy-rich country; it can afford to end fuel poverty, or continue to subsidise private profiteering – but we can’t do both.

We need democratic public ownership of energy production and supply in Scotland. The SSP supports the creation of a National Energy Company to direct an energy policy that is for people, not for profit.

Public money heavily subsidises oil barons and fossil fuel billionaires – but that doesn’t turn into secure jobs for offshore workers. The North Sea oil and gas sector has seen almost 200,000 job losses since 2014, and conditions are getting worse. 82% of sector workers want jobs outside of oil and gas – half of them in renewables.

Workers are not the obstacle to a green transition – they are the solution!

Despite Scottish Government promises, figures from the Office for National Statistics have shown that the number of ‘green’ jobs in Scotland continues to lag behind, having fallen by almost 4,000 between 2016 and 2021.

Building jackets for offshore windfarms in Indonesia, and shipping them 7,000 miles to Scotland, while yards like BiFab are mothballed, is unsustainable and unacceptable. Instead, let’s bring manufacturing jobs back to Scotland.