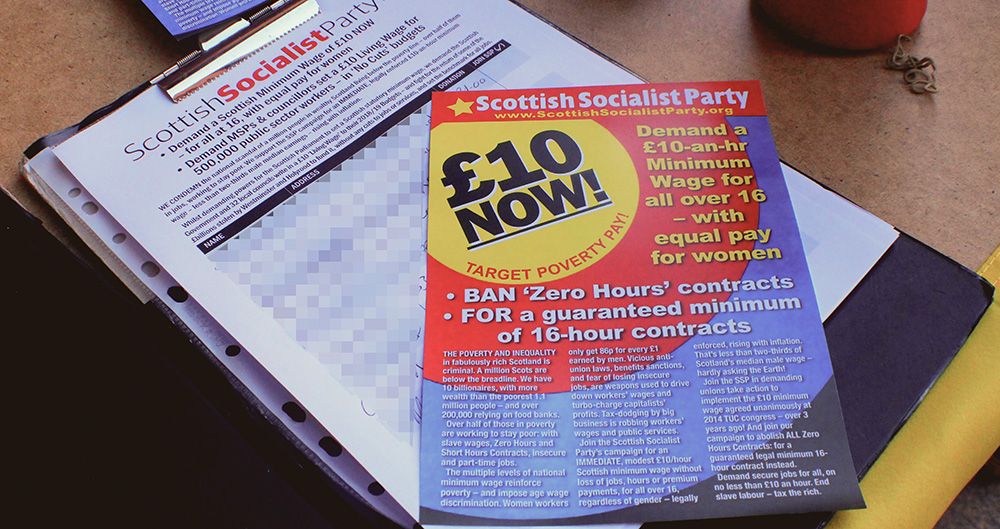 It was a Baltic Saturday across Scotland, but the heartfelt response from people on the streets warmed the spirits of the SSP activists who braved the biting cold.

Saturday 18 November was a hastily organised SSP National Day of Action around our campaign demanding that the Scottish government and all 32 councils write a guaranteed minimum of £10-an-hour for the 500,000 workers they employ into their Budgets for 2018/19. A guarantee that from April 2018, nobody they directly or indirectly employ would be trying to survive on anything less. 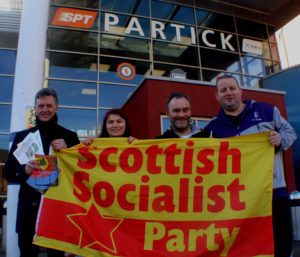 Street stalls and street meetings were held in both Glasgow’s Partick and Govan; Nairn; Edinburgh; East Kilbride; Paisley, and Cumbernauld… with the same already planned on other days this week when more members are available in Ayrshire and Coatbridge. SSP members with decades of experience combined with members who joined just weeks ago. We all felt an added sense of purpose, being part of a coordinated, national plan of action, with a clear goal.

Demand Action from the Anti-Tory Parties 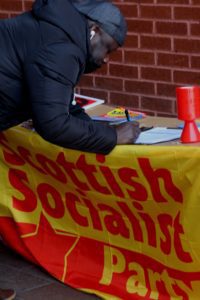 We called this Day of Action in the run-up to the Tories declaring Westminster’s Budget on 22 November: undoubtedly with further cold, cruel cuts to the living standards, jobs, and services of the working class.

Hell will freeze over before the Tories start looking after the well-being of the millions, as opposed to the profits and privileges of the millionaires. So it’s right – and urgent – that we demand action from those politicians closest to the ground in Scotland, who also like to define themselves as anti-austerity. We want words made into deeds by Scotland’s anti-Tory parties.

That’s why the SSP – who have fought and campaigned in the streets and trade unions for an immediate, statutory £10 minimum for all over 16, with equal pay for women, since September 2014 – is stepping up the pressure on the SNP Holyrood government and Labour and SNP councillors across the country.

Tales of Poverty Amidst Plenty

Anyone doubting the urgency of this policy demand need only have joined us on the streets to be reminded how modest – indeed, increasingly inadequate – the call for a £10 minimum, here and now, really is.

We met the man who simply stated: “I looked at an old wage slip from 15 years ago, and there’s very little difference in my earnings now.”

The Richmond Fellowship care worker who was furious at being on £7.50 an hour, unable to afford a holiday, when she has dedicated herself for years to a job she loves, caring for the most vulnerable.

People scrimping and saving simply to pay the rent and buy food. And as a visiting Swedish friend of the SSP observed, the visible poverty of people coming up to our street stall. 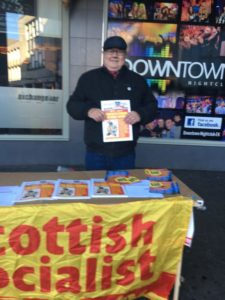 Local authority workers at a few of the street stalls expressed their anxiety at yet more cuts looming in the forthcoming council budgets. Which is why our campaigning demand for councillors to set No Cuts Budgets, with the £10 minimum included, and then fight for the funds to do this, is so timely and important.

No councillors – whether Labour or SNP – should be prepared to trade wages for jobs, or workers’ conditions for public services. As we hammered out in speeches on the streets, Scotland is a fabulously rich country, with ten billionaires, enormous resources, skilled workers and piles of profit – but also over 200,000 people relying on food banks to avert starvation, including people in jobs – and a million below the poverty line, over half of whom are working to remain poor. There’s no excuse for poverty in this rich country. It’s a question of radically redistributing the wealth.

Keep up the Fight!

The street meetings and stalls on Saturday were just the start, the prelude, to an orchestrated campaign of explanation and pressure on the Scottish government and councils of all political stripes to put their money where their mouths are. 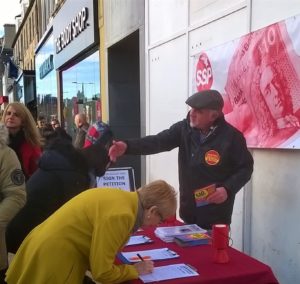 To use their already existing powers to implement a (non-statutory) so-called Living Wage for all half-a-million public sector employees – but to set it at £10, from their new financial year, in April. To write this into the Budgets they’ve started to consult on.

Not only is this a timely campaign because all the Budgets have to be finalized by February, but also in the midst of mounting inflation – especially on essentials like food – and growing demands to scrap the public sector pay cap. The SSP will step up this demand for an immediate £10 in our unions as well as on the streets.

And the Online Petition which I recently launched on behalf of the SSP is targeting demands for action not only on Scottish First Minister Nicola Sturgeon, and the heads of the councils’ umbrella body, COSLA, but also new Scottish Labour leader Richard Leonard, who we have written to establish dialogue on areas of shared interest. 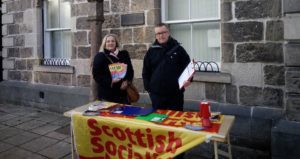 Richard’s leadership election victory speech referred to offering ‘hope’ to the Scottish people. Here’s his chance of doing so: we are calling on him to instruct his Labour Party councillors to break the habits of several decades and refuse to vote for a single penny in cuts in the councils, and instead inspire public sector AND private sector workers with a decision to implement a £10 Living Wage immediately – not in 2020, as Labour has so far pledged, which will be severely devalued by inflation by then.

The response to our fighting demands on the streets on 18 November bodes well for a sustained, determined campaign over the weeks ahead as Scottish and local budgets are debated.

One young lad challenged us: “Say you want to abolish zero hours contracts and a grant for students and I’ll sign your petition.” We explained we’d been speaking out all morning for an end to this modern slavery, and instead for a guaranteed minimum 16-hour contract for all who wanted it, alongside the call for £10 minimum. He signed!

“Thank you for doing this.”

A woman who’d recently settled in Scotland from Africa stood literally a metre away, listening and nodding agreement as we made a speech on the PA system, and then walked over to sign our petition and buy the Voice. Another woman simply told members behind the stall, “Thank you for doing this.”

The SSP is proud of all the members “for doing this” – braving the elements to broadcast our simple, stark, perfectly sensible alternative to poverty, inequality and cuts to public services. In virtually every corner of Scotland. We have no intention of making this campaign a one-day wonder. We need to repeatedly pile the pressure on the SNP and Labour politicians – including their leaderships – who after all were elected by pledging to oppose Tory austerity.

We need more street campaigning; more propositions for this policy in the public sector unions; more volunteers to do all this… and we need thousands of signatures on our Online Petition.

Please play your part in this battle to set the pace in the public sector, transform the lives of tens of thousands of workers – and vastly boost the battle for an immediate, legally-enforced £10 minimum, rising with inflation, for all workers across the land.

Get in touch to offer how you can help – or if you’re convinced, join the SSP today!