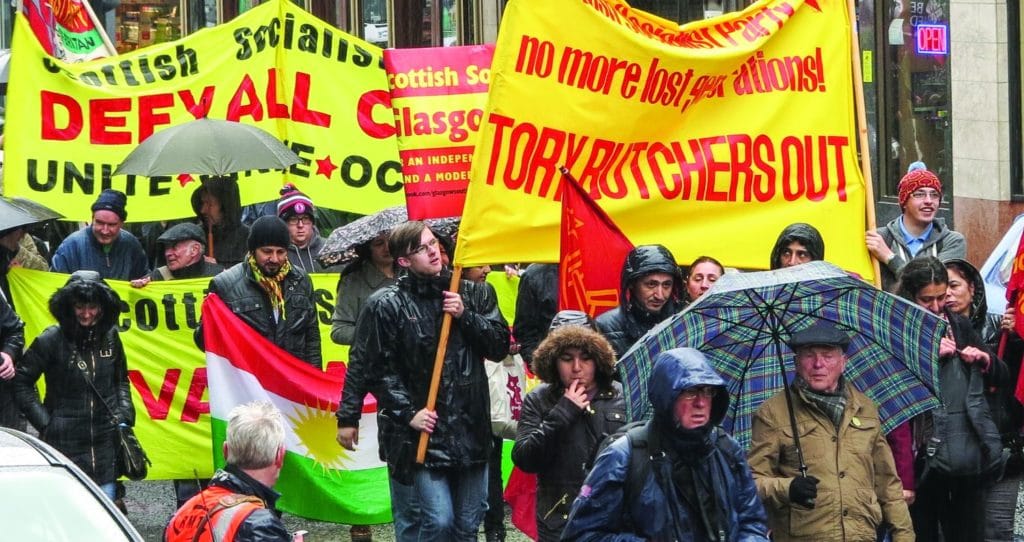 I met the eminent economists Jim and Margaret Cuthbert of Stirling University this week to discuss the details of the Tories plans for so called ‘Full Fiscal Autonomy’ and the new Scotland Bill. We both heralded the earlier than usual arrival of the ‘silly season’ at Westminster.

The columnist David Torrance writing in The Scotsman this week probably put the issues best when comparing Full Fiscal Autonomy [FFA] to the famously inscrutable Schleswig-Holstein Question that vexed 19th century Germany and Denmark. FFA he said sees the “SNP ask for things they don’t really want, the UK Government make sure they don’t get it by insisting ‘it’s bad for Scotland’, before the SNP finally claims they have been deprived of something vitally important.”

Devil in the Detail

When asked during the General Election whether the SSP supported FFA or not, I tended to reply it really depends on what it means. For the devil is as they say ‘in the detail’. Extending powers to Holyrood is by and large something the independence movement favours as another stepping-stone to complete self-determination. But in practice it clearly depends on what specific powers are proposed and what conditions are attached to the offer.

The ‘full autonomy’ proposed by the Tories is in fact nothing of the kind. Incidentally, the deeply flawed Scotland Bill does not offer the FFA the Tories hypothetically pose. Rather it is a rehash of the non-event that was the Smith Commission. And in fact, as the Cuthberts have pointed out in the excellent paper they produced for the Jimmy Reid Foundation, it represents a trap for the independence movement.

Why is FFA a trap? Because it proposes very limited extra tax raising powers and devolves decisions to Holyrood which passes on unpopular spending cuts rather than leave them with Westminster.

Moreover, FFA does not propose the devolution of any other taxes such as oil and gas, VAT, the duty on alcohol, fuel and tobacco, Capital Gains Tax, Corporation Tax, etc. The FFA the Tories want merely proposes to devolve Air Passenger Duty, the Aggregates Tax and some welfare powers.

The Cuthberts point out that Scotland stands to gain very little and risks a great deal from this arrangement. We continue to have very little control over our economy of its financial levers.

Income tax is a very limited dividend offering little room for manoeuvre and, it could be argued, could even be politically detrimental. If for example the Tories at Westminster cut income tax South of the Border and balanced the books by reducing spending on reserved matters like defence or overseas aid, Holyrood would be forced to match the new rate and yet could only cut devolved expenditures like health, education or local government. That would be wholly unpopular politically, and the Tories realise that.

As well as falling short on the income side the FFA the Tories and their Labour allies envisage, it also sees Scotland obliged to pay a proportionate contribution towards the UK’s historic debt (one we played no part in deciding), a share of Britain’s EU contributions (without any say at the top table), as well as billions towards defence and foreign affairs expenditures (again with little political input on its objective).

FFA was historically deemed to mean Scotland would keep all its own revenues and pay for all its ‘domestic’ public spending. For foreign affairs and defence it was suggested it would pay an annual contribution to the UK Treasury for these shared services.

The Scotland Bill proposes no such thing however. It is a rather rehash of the limp proposal drafted in the immediate aftermath of the referendum. The Green and SNP negotiators accepted ‘surrender terms’ drawn up by the Tories. But that was a long time ago and the political terrain in Scotland has ‘changed utterly’ since then. Nonetheless, the Tory Government and Labour’s sole representative North of the Border insist Smith is implemented in full.

The SNP on the other hand is split on the Scotland Bill. It obviously signed up to and supported it at the ‘Smith stage’ but now that it has 95 per cent of Scotland’s MPs, it is desperately trying to get out of it.

The trouble is they will now appear to reject extra powers for Holyrood and since they are in a 10:1 minority at Westminster, the Bill will be forced through. They will therefore find themselves voting against more powers for the Scottish Parliament.

But they must because it is a ‘Trojan horse’, one the Cuthberts suggest could eat a huge hole in Scotland’s economic and political coffers.