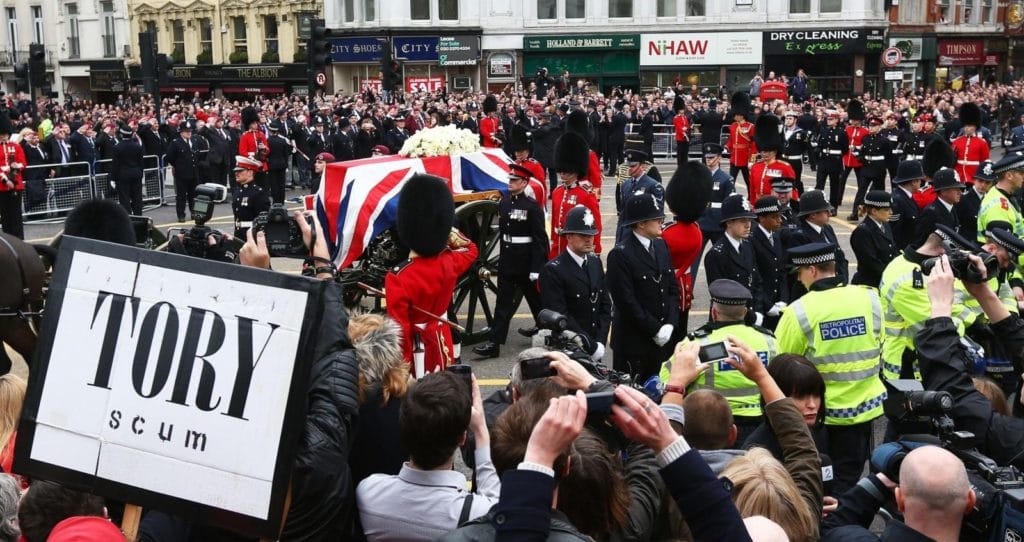 It will surely become one of those questions people ask periodically – ‘where were you when you heard Thatcher was dead?’

I was in a traffic jam adjacent to the Antarctic sailing ship RRS Discovery in Dundee. After switching on the one o’clock news, I felt compelled to leap out of the car and with both arms raised high in the air loudly exclaim, ‘Ya dancer!’

To my great delight, the horns of other motorists blared and their headlamps flashed all around me in a clear expression of solidarity.

The Scottish Socialist Party conference last weekend ended on an equally upbeat note. After our communal rendition of The Internationale an impromptu cry of “Maggie, Maggie, Maggie!” went up and a spontaneous rousing chorus came in reply ‘Dead, Dead, Dead!”

Although it is considered good manners ‘not to speak ill of the dead’ this convention was largely ignored in working class communities across Britain.

‘Good riddance, to bad rubbish’ was the prevailing view of people here. And rightly so, not least because the right wing press had spent the week attempting to re-write history and claim, for instance, that Margaret Thatcher was brought down, not by 15 million non-payers of the Poll Tax, but by Tory party divisions on Europe.

They also insisted she saved Britain from economic ruin and gave working class people “freedom” to buy their council houses and “freedom” to buy shares in privatised public utilities. It was inevitable then that in death, as in life, Thatcher would evoke profound class divisions.

There were never going to be any tears shed for her in the former mining communities, steel towns or manufacturing centres she destroyed. Here, her legacy was burned into universal consciousness by the bitter experience of mass unemployment, the most vicious anti-union laws in Europe, the redistribution of wealth from the poor to the rich, the race riots, the obscene rewards for City spivs in contrast to the impoverishment of millions of men and women she forced into early graves.

And her reputation internationally was no less vile. This was the woman who denounced Nelson Mandela – one of the most inspiring figures of the 20th century – as a ‘terrorist’ for daring to fight back against the vicious, racist Apartheid regime in South Africa.

It was Thatcher who invited General Pinochet, the Chilean dictator who overthrew the democratically-elected government of Salvador Allende and murdered thousands of socialists, trade unionists and leftists, to escape justice and live in luxury in London. She also used the UK’s veto on the UN Security Council to repeatedly prevent the ‘international community’ acting against Israel its for violations of Palestinian human rights.

But ironically, all things considered, Thatcher’s most indelible legacy has been New Labour.

Few can doubt how she remapped the party political landscape of Britain as first Neil Kinnock, then John Smith and Tony Blair all paid her the biggest possible complement by adopting her economic and social philosophy.

And yet it is ironic that Thatcher’s trenchant contempt for Scotland led to the establishment of the Scottish Parliament in Edinburgh. Just as her flagship policy was defeated, not by limp and ineffective Labour opponents, but by 15 million ‘refuseniks’, she was defied in Scotland too by further mass action.

The ‘democratic deficit’ that continues to see majority opposition to the Tories in Scotland neutralised by Westminster became so pronounced under Thatcher it later forced Tony Blair into devolving some limited powers to a new parliament at Holyrood.

There is however one conclusion all can agree on – Thatcher may be dead but Thatcherism lives on.
For the Tories are today as right wing as Thatcher ever was. Their Bedroom Tax proposal for example bears all her hallmarks and has been introduced in Scotland against the overwhelming wishes of the population in the same way the Poll Tax was.

And if Labour became a pale imitation of the Tories in the 1990s, they are certainly no less right wing now under “Red” Ed Miliband. Even the SNP have adopted her neo-liberal economic model.
All four parties capitalist parties in Scotland continue to pay homage to her today in their own way.

It is left then to the Scottish Socialist Party, as many at our conference last weekend pointed out, to continue the defiance of Thatcherism and its neo-liberal ‘Praetorian guard’ of rampant uncontrolled finance capital.

Like the National Union of Mineworkers and the Anti-Poll Tax Federation before us, we steadfastly refuse to bend the knee and allow their class to destroy our communities and our values.

We resolve once again to build an independent, socialist Scotland. That would certainly have Thatcher spinning in her grave for eternity.