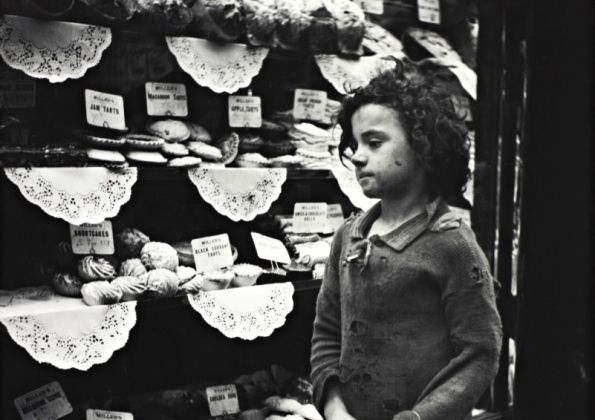 Edith Tudor-Hart was born into the fag-end of the Austro-Hungarian Empire at a time of serious social unrest. Vienna was plagued by poverty brought about by mass unemployment. This gave impetus to the Social Democratic movement known as ‘Red Vienna’.

Edith Tudor-Hart became a dedicated communist and spy for the Soviet Union. She used photography to make her beliefs a statement on the situation of ordinary folk. She was arrested for subverting the State and only escaped a lengthy gaol sentence though marriage to an Englishman (Tudor-Hart). The consequence of this resulted in permanent exile to Great Britain.

Her photographs speak for themselves, as the everyday lives of people at work rest and recreation in the 1950s and ’60s – miners in Tyneside, dole queues, undernourished children in London, naked children wearing protective goggles, being soaked in ultra violet light to cure rickets. Architecture includes the monolithic ‘Karl Marx Hoff’ apartments for workers. What would the great man think?

The photographs are immaculate (perhaps too much so) and may seem a little posed and lacking in spontaneity to an eye used to modern media. Despite this they do signify the times and seem to impel the viewer toward a wider World view.

The exhibition is reinforced by an eight minute, continuously running black and white 16mm silent film showing Viennese workers at the May Day demonstration in 1927. It shows a sea of people flooding down streets into the main square. Grainy images of speakers exhorting the crowds lend authenticity. So, if you only have eight minutes to spare, the exhibition is worth a visit just for this…to observe overwhelming people power as the crowds wash to and fro.

Around the corner in the Scottish Gallery (16 Dundas Street) is an exhibition of the painting of the late Joan Eardley (free) Much of her work was in Glasgow where she fed her art with first hand observations of deprived children.

They are drawn in pastels and oil in a semi-impressionist style that produce a stunning evocation of life in the tenement slums of the 1950s and ’60s.

For a snip of up to £120,000 you can have one of those children hung on your wall, with eyes boring in to you. Eyes that reflect the crushing deprivation of those years.

The exhibition closes on 27 April but her work is recorded in most contemporary art literature and is frequently displayed.

‘Catterline in Winter’ is on permanent display in the reception area of the Dean Art Centre.