The Scottish Socialist Party supports Scotland’s right to self-determination – and supports Scottish independence as the pathway to real change: an independent, socialist Scotland.

In the first Scottish independence referendum of September 2014 the SSP, as a member of Yes Scotland and the Radical Independence Campaign, played a crucial role in shaping the independence movement into a positive vision for a radically transformed Scotland – a vision that won a large, enduring increase in support for independence among Scotland’s working class. Now we need to finish the job and get independence done.

Not More of the Same

Independence is Scotland’s route to a new, better normal and a new, democratic society: real change for Scotland. We reject both the broken status quo of the United Kingdom and the SNP’s vision of a Scotland – which imports the discredited status quo into an independent country.

Scottish independence not about simply moving power from one politician to another: it is about democratising power, and putting economic power back into the hands of the people. It is about real change, with a publicly-owned and needs-based economy as the core of its future prosperity, and winning powers to take the necessary radical action to deal with the challenges of the 21st century.

Independence for the Working Class

The Scottish Socialist Party has always supported self-determination and Scottish independence. But we are socialists, not nationalists; we’re campaigning for an independent, socialist Scotland, and a modern, democratic republic – not a neoliberal nightmare locked into a discredited status quo.

There is no Westminster route to the kind of country that we all want to see. With support for independence reaching record highs, undemocratic opposition to self-determination is undermining the working-class movement in Scotland, and handing the initiative to Tartan Tory technocrats.

In order to put the power back into democratic, working-class hands, we need workers, Trade Unions, and you to lead in the building of a better vision for an independent Scotland.

Scotland is a wealthy country – rich in natural wealth in land, in the sea, and in sustainable sources of green energy. Poverty and inequality in Scotland are a consequence of a system that props up landlords, billionaires, and private profiteering. We can build a new, independent Scotland with a democratic, publicly-owned economy designed to meet the needs of its people.

That’s why we reject the broken system of Westminster government, and the SNP’s discredited neoliberal plan for independence – which would undemocratically tie us to Westminster, the Bank of England, and to NATO. There is an alternative to dogmatic Unionism and neoliberal independence – an independent, socialist Scotland.

In Andrew Wilson’s own words, the plan for independence put forward by the Sustainable Growth Commission and the leadership of the SNP is just “the softest possible” form of independence.

Under these plans, key economic levers relating to monetary and fiscal policy will remain in the UK – with the City of London, with the Bank of England, and ultimately with the Westminster government.

This means that people living in Scotland will have no democratic control over their own economy, and will not be able to carry out the critical public investment in the economy to help Scotland recover.

What Andrew Wilson is dictating, without any democratic oversight, means years of disastrous austerity, and a doubling-down on the failed economic model of the UK. Incoherent and misleading claims about retaining the pound – the same mistake made in 2014 – undermine the credibility of the SNP’s leadership.

We need you to support an independent, socialist Scotland, with a plan that takes power away from Tartan Tory technocrats and builds an economic democracy instead.

Scotland’s working class has benefited from devolution – but, under successive Labour and SNP governments, not nearly as much as promised. We know that devolution can do much more, but there are limits to what devolved government is capable of delivering. 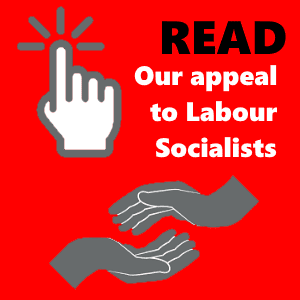 There is no Westminster route to a better kind of country, and rearranging the bureaucratic deck chairs does not solve the problem. Delivering real, lasting change means taking economic power away from the City of London and returning it to democratic control.

The principle that workers across these islands should be united as one is powerful and important – but it isn’t independence that undermines that principle; it’s the Unionist trap. This is why support for both self-determination and independence among Labour supporters is reaching record highs.

The Scottish Labour Party’s undemocratic opposition to self-determination is undermining the working-class movement in Scotland, and handing the initiative to Tartan Tory technocrats like Andrew Wilson. In order to put the power back into democratic, working-class hands, we need workers, Trade Unions, and you to lead in the building of a better vision for an independent Scotland.

A Mandate for Self-Determination

Support for Scottish independence, and for holding a referendum on independence, remains high. The imposition of successive Tory governments without popular support in Scotland, withdrawal from the European Union, and the unprecedented economic crisis caused by Coronavirus underline the need for Scotland to chart its future course. People demand real change for Scotland.

Democracy is never a “one and done” affair. A “No” vote in 2014 does not prevent Scotland from asking itself the question again in the future. Successive Scottish Parliament and Westminster elections have produced clear mandates for Scotland’s right to choose – it is democratically unjustifiable for the Tories and the Labour Party to obstruct that.

Winning independence will take more than words and gestures. With a Tory majority government in Westminster opposed to the right to self-determination, forcing progress requires the collective, organised effort of the working class and working-class organisations. The Scottish government, local authorities, community groups, and Trade Unions have a responsibility to resist austerity and attacks on the working class – to that, we add the demand for Scotland’s democratic self-determination to be recognised.

Why the Scottish Socialist Party?

In 2016, nearly one million pro-independence votes were wasted by the “Both Votes SNP” strategy. This is because the proportional representation system makes it difficult for parties that win a lot of constituency seats to also win regional/list seats. Boris Johnson’s Scottish Conservatives have benefited from this mistake. The result is a paralysed Parliament, and devolved leadership more concerned with defending the status quo than advancing possibilities for radical change.

We don’t need more parties offering only more of the same, and we don’t need splinter groups from the right-wing of the SNP. A radical, socialist, working-class pro-independence voice is critical – and the Scottish Socialist Party has a proud record of advancing progressive demands in and out of Parliament.

With socialist representation, everybody benefits. The SSP introduced Holyrood legislation ending poindings and warrant sales, ending prescription charges in Scotland, and providing free school meals to every school pupil. In 2021, we’re bringing forward plans for a publicly-owned National Care Service and to scrap the regressive Council Tax, to build 100,000 Council homes per year to fix Scotland’s housing crisis, for a Socialist Green New Deal, to win a better deal for workers, and to advance the progressive case for Scottish independence: an independent, socialist Scotland.